July 01, 2008
I grilled burgers for the kids tonight; the sky was a pale dark. The flames leapt up on the grill. We had a picnic on the porch of our well appointed home. This summer, we have been very close - all of us. Its been fun.

But I didn't say this outright. I started the discussion by saying something else, perhaps more of what the author intended in his statement.

I started off by saying that we like to think that organized religion, and the profession of faith - is a benevolent thing, when , in fact, its not always the case. And that ideas like those we find in "The Golden Compass" might be very valuable to learn. After all, I said, it was the organized church that pressured the Roman Pilate to crucify lord Christ at Golgotha.

Then, I mentioned that the Author of The Golden Compass wanted all of his books to be about killing God.

She asked, "Did the people who killed Christ, feel sorry for what they had done?"

I replied, "The wife of the man who killed him, later found herself following him. And the man who was set free to live, while he died - a thief named Barrabas, later also found his way to him. He had this amazing effect on people."

We watched a bit of "The Golden Compass" later that night, my son decided to read a book, instead of watch the film. We have a wonderful hardwood floor and we've set up a nice place for the family to play games- he's almost always there at night, playing games or reading. But my daughter was intrigued - and she and I worked our way through the first part of the movie, as is our way. I think he wants to play more, and watch TV less...

The film unfolded while my little boy read. Key to the film "The Golden Compass" is this concept of "dust". Dust, is a sort of ether, that permeates the parallel worlds in this book.

Meanwhile, back on Earth.

A child is airlifted to the top of a medical hospital. Inside, the body is maintained by machines and trained technicians operating them. Above, the engine of the helicopter blasts the blood and petrified bones of a million birdsongs of the mesozoic into carbon that floats gently up into the sky, its whirring blades drawing an arc into the fluid air. The lights flash about the helicopter pad as the little body is drawn into the safety of a sterile hospital.

Below, and across the street a mother is giving birth. An old man is dying. And a young child soon will be admitted to a doctor, who is very tired. His hands will suddenly find that they are steady. And his eyes sharp. The young child will be operated on.

Many years later, the doctor will slowly fade from his practice - his sight dim, his hand unsteady. The surgeon will no longer be able to wield a scalpel as an artist, and the atheists mass will be complete.

But those moments, remembered. The little child's faded memory of the helicopter. The flashing lights as they left the heliport. The kindly smile of the doctor. The dull cut of the incision , felt under layers of anesthesia. Later, the gentle pain of recovery and the slow comfortable awakening to a better life.

There is science, yes. But there is also something else. And as much as we would believe we are the only ones here. The surgeon, now 50 years older - sitting alone, in a small room overlooking the mediterranean. Looks up from his book. And remembers the small child he operated on so long ago.

And the surgeon quietly wonders what strength truly guided his hand. How did he cut so cleanly, that no tumor was left? No trace. Why did that child live, and so many others - died? He is at the center of what others would want to call science. The child lives, there are simple explanations. But how complicated when one child dies. He remembers a book - The Atheist's Mass - Balzac. Is his life , contained in the practice of his art? Will there be anything left of him, now..?

And many years later, an old man holds his hands up against the light reflected from the sea. They are worn, and tired. He is tired.

He dies. And his soul is dissipated. No afterlife. No image of him, anywhere. Deleted, a trigger firing off some stored procedure of an unknowable cosmic database. Purged.

The patients he operated on, only remember that they are better now. The money he made, is gone. His body, at his request, is burned. His ashes are scattered across the sea. Nothing is left.

And the child he operated on, has grown to an adult. And he walks across the street, in New York City - and is struck down by a drunk , careening through the street in an SUV, with a "W" sticker on the back. His body is shredded under the wheel of the vehicle. The cavity of his chest, bearing a faint scar - implodes under the weight of steel, and burning dinosaur.

And still. Nothing left but science. The simple mechanics the city will feed upon. No question. ... or.... ?

Was there something reflected from the sea, that day? Could you see it , perhaps - out of the corner of your eye?

You and I are tuned, to be at a certain wavelength. That is something that is better , you realize now - as any good scientist would realize. The assumptions we make are crucial.

In the film, The needle turns to a woman. lightning. and a baby. These are symbols. Perhaps there are other symbols that point to different visions of the real.

I think its fun when the author leaves it to us, to figure things out. Maybe the Bible is the same way. But interchangeability , talking heads - that silly stuff never was part of the story. Religion is not about man, its about men who seek to shape mankind to their idea of what they should be like.

What happens when you leave Earth? Science tells you that you will die here. Your muscles cannot withstand the journey. Bones will grow brittle. The different light from another star blinds you, or is so dim you cannot see. Your body breaks down. Spaceflight makes you insane.

So. Are you earthbound? Will you never leave this planet? Is everything, that you ever were - just a speck of dust on a small , insignificant planet around a third rate star on the outer edge of a smaller galaxy? 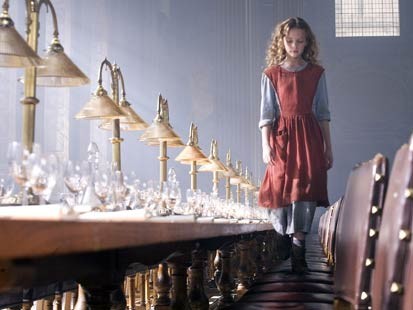 A good scientist, always remembers the first rule. Nothing is absolute. Our limited range of experience, and perception - is something that might be able to deliver to you the simple basis by which the entire universe is constructed - a set of simple axioms, mechanical concepts that reconstruct reality itself? More likely , we are like the blind men observing the elephant - each part of what we observe, seems different. While in fact they are all one thing. The big legs, like tree trunks - the long nose, like a snake. And so on.

Perhaps it is more likely that the universe has more than the number of dimensions we can truly perceive - and that the rotations of these shapes, and objects project upon our world a type of reality that is only a shadow of a higher reality. Beings whose interest in our well-being, so infinitely greater than us - that they themselves take on other qualities we can barely perceive? We don't write up scientific papers that rely upon that step "and then a miracle occurs" - but we do write up papers that seem to be asking ever deeper questions about the universe. What happens when we finally reach the question - of love?

The helicopter lands on the roof of the hospital. And in this universe, perhaps - a child and a soul are both found upon that landing pad - both skirted away to an operating room where a surgeon gives up a part of his soul.

As did the dinosaur. And every other particle of life, upon this small planet. All forged in the heart of a supernova.