The State of the Republican Party

November 29, 2011
The Republican party is dying. The key issue that is dividing and destroying the Republican party - is the issue of lobbyism. The modern GOP is a neo liberal institution whose focus is primarily on welfare for the wealthy and the institutionalization of corporate lobbyism. This is no different than the Whig party and the issue of slavery in the 1850's. An issue that destroyed the party itself. The candidates tell the story.

If you do not believe this, take a look at their front runner. Why should a candidate have to struggle, to validate the fact that he listens to his own constituency and does what they tell him to do? Governor Mitt Romney is struggling to attempt to explain what is effectively an independent resume - essentially incorrupt, his is a record of application of what his constituency wanted at any given time, during his tenure as Governor of Massachusetts. Romney is now firmly in the grip of a lobbyist-influenced primary process where , instead of appealing to the Massachusetts constituency - who were and are very happy with him - rather, instead a group of people - led by lobbyists - who are trying to bring forth the concept that the wholesale monied corruption of democracy and the institution of a far right agenda are actually what America wants or needs. As a result, he is caught in the vise grip of trying to repeat their well worn, hackneyed talking points - and recounting his own record. This makes for some funny moments.

The opposition to Mitt, comes from a wide group of relatively unqualified candidates. Republicans have been going back and forth for nearly six months ... no, actually eight months... as to whom they would like to lead. Herman Cain is out of the running. Perry , the one time front runner - is out as well. All of these men were running slick, well financed campaigns that include - a priori - lobbyists.

Except for the guy who was running a one man show. This is, of course, the guy who took a 1 million dollar paycheck as a lobbyist back in 2007, months before the big crash - lobbying for the very companies that caused it.

It is lobbyism that is the central issue in the Republican party -and that issue driving it apart. 72% of Americans want healthcare reform. The Bush Republicans chose to oppose it loudly and vocally , and won election in 2010 over a record wave of corporate spending that was equalled only in the previous record wave of corporate lobbyism and the surprise ruling that corporations can give as much as they want. The GOP is controlled by lobbyists. Another good example is the super committee- which lately has become the super-campaign-gestures committee. 68% of Americans want a compromise that allows our government to reduce its spending. The Bush Republicans choose to block every compromise effort, because they are controlled by lobbyists.

Not many people know that Newt Gingrich said that, but he did. It was right after he was re-elected and found out that his own party had attacked him from the inside, and then just as he was elected - he announced his resignation.

But somehow, the GOP became the party who stands for the monied corruption of democracy. And to me, as a bona fide independent - who has serious conservative leanings. I find that absolutely hilarious. Almost as good as the one about that pre eminent, first world country - who is the only country left in the world, without national healthcare. Not heard of them? They're the ones who are spending more, per capita, on healthcare - than any other country in the world.

The GOP ... likes to call themselves conservative. But in all reality, they're not. The Bush Republicans, with their radical expansion of government and largest spending bill ever - in the history of the US - saw to it that the GOP can no longer lay claim to conservatism. The GOP is a dying party. Just look at their lineup. They are like the Whigs - A political party in America that broke apart on the issue of slavery. The key issue about Romney, and the GOP - is healthcare reform. Still. The economy is recovering from the Bush Republican body blow of 2008. It's back up on its feet. The GOP is still struggling with the fact that they oppose what many Americans want and need. And they are doing so because they are controlled by lobbyists. They are not the party of conservatism - with that much spending on the books. Nor, can they lay claim to being the party of the family - if they are so willing to break families up and interfere in the lives of everyone (whether by so called patriot act, or by outright meddling). They are not the party of national security - having embarked upon wars of convenience that have cost 300% more than any healthcare reform. Obama killed Bin Laden. He was the guy we were after, not the oil fields of Iraq. They didn't invade us. What is the state of the GOP? They are breaking apart. They are the do-nothings. 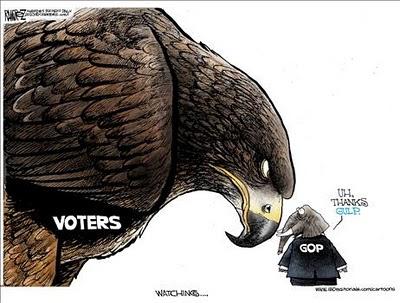 And we, as Americans - who need - the congenial ebb and flow of healthy political statesmanship - are most decidedly. Not amused.