Tiger Kitty, One of Six 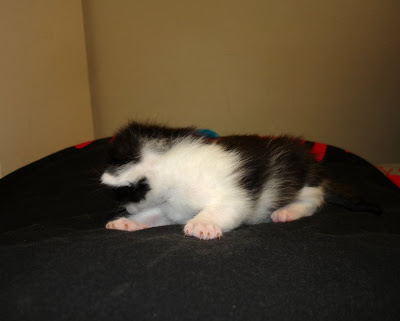 All six are healthy and the mother is fine. They are still very small and we have elected , after literally an hour long argument between myself and my daughter - not to name them. I am a believer that naming a kitten or a child should not be a traumatic experience and if it is, just drop it and come back to it. She trenched in and said that we were not going to post any pictures to the net, nor were we going to allow anyone to suggest names. I argued that it would be alright if we posted the kittens to the net, it might help them to find a good home. And further, I said that I am taking the pictures and so, I own them. She argued about this for an hour - back and forth we went, as if uploading a picture of a kitten is the worst thing in the world. At the core of the disagreement was the concept that I was to be allowed to write on my blog - or to make friends with others. This was something that she learned from her mother - she does not want me to write at all. She thinks its a waste of time. But the upshot of it all is that it poisoned the well. I didn't want to name the kittens in this atmosphere.

She's right. Sometimes it is - nevertheless this is my blog, and I took the pictures along with her and I was excited about trying to name them today. But I finally decided the kittens are too small to share their photo and I will wait a few days before we re-photograph all six and post them - if at all. She was adamant about my not posting them, and just like many disagreements with her mother - the worst thing I felt I could do would be to let her use her anger and aggression to any level of achievement. And she did try. She took the camera away. Threatened to throw away the memory stick. Threatened to throw away the camera. Tried to give me back all the rechargeable batteries I gave her (we had an agreement that if I bought her batteries, I could use her camera). She refused to allow me to have the memory stick. Told me that any name I would offer to the group for any kitten, she would vote down (our names have to be unanimous). She wouldn't let me copy the images to the computer. And finally, when I had loaded them to the computer - she walked outside and stood by the pool for nearly 15 minutes... scowling. Pattern behavior, very similiar to her mother.

Once, her mother tried to call 911 because I was taking my son to a cub scout meeting. Half of me wanted to let her call. So she could try to explain what it is, that I was doing ... but ... you get the picture.

I think my daughter senses that I am starting to drift as a husband (ex husband?) and that she doesn't want me to share any part of my life with.. you. She believes that you are part of the problem, and not the solution. She knows about Bettie Page and she hates her. The arguments closely follow a pattern that was laid out by her mother - accuse me of doing something wrong, demonize me for it, punish me by damaging something - taking something away from me that I love.. or fighting and arguing so much that nothing gets done anymore.

To be honest, I didn't want to post this picture. I guess the only reason I am really posting it , is so that we can check to see if the world ends.

The best thing that could happen would be for me to realize that you don't really care for me at all. Nothingness has great power. I can handle being alone. I think, in part - this is why the film "Moon" held such fascination for me. It is about a person that is completely alone. Ok. He has a robot.

I have this blog. Thrillsville. Note to self: Floss.

Brook said…
Flossing is important. Fostering healthy behavior in your children is too. Breaking the bonds of manipulative harmful practices is very difficult but necessary for all of us. You have felt the pain of her mother's behavior in your life, how difficult to aim for the healthy future relationships your children may hope to have rather than take the quick and easy way.
The kitten is a fluffy delight, a smile waiting to happen and there is no harm in sharing happiness.
Thu Apr 29, 12:06:00 PM 2010