Boners and Pie ( A Craigslist Ad)

You know, Craigslist is a constant source of surprise and entertainment. Hidden amongst the requests for thick hos, boasts of pussy-eatin' prowess and ubiquitous tool photos reside the occasional literary jewels, one of which this is not. So why am I here and what do I want? Well in the words of a gifted writer I know, I'm "addressing some intrinsic human need, some basic element in our animal hard-wiring, some desire to belong to an extended entity that is both bigger and more complete than the individual alone." Yes, exactly. I'm lonely for that other half that makes my already full life feel glitteringly, gleefully, gloriously larger than life. Like home, in fact. Like irresistible bliss.

I want the one who adds dimensions to my incredibly complex, multifaceted, asynchronously-developed self, and in whose company I tend towards healthy growth rather than stagnation or lepidopterous flitting. I want a musclebound temp with post-graduate education who makes me laugh my ass off with shocking regularity (but rarely makes me feel a deep-seated desire to smack him upside the head), while also fully grasping the scintillating nuances of my sardonic sagacity, should it happen to make an appearance. I want a man with a functional level of competence and at least a modicum of verbal adroitness who adores me now, and admires who I used to be as much as the amazing person I may choose to grow into. I want a nice well-adjusted genius to play pool with me, turn me on to ideas and authors and music and games I've never run into, and fuck my brains out repeatedly but with a sense of fun. I want a new friend lover partner husband who still harbors pothead tendencies but isn't one, who can communicate and has something to say, who is capable of both teaching and learning graciously, and who enjoys being offensive and offended, but not hurtful or hurt. I want a companion who digs both ideas and me, the water and the woods, kids and my kids, but isn't desperate for me to produce one. I want an intellectual dilettante who loves music and laughter and being alive, and appreciates achievement and enjoys slackness, and wants to love all these things with me, and maybe a movie or play while we're at it. I want someone to love, dammit, and to touch in a zillion intimate ways, and to feel like family, and to BE family, but I'd take a friend who felt like home should feel instead, if that's what I found. 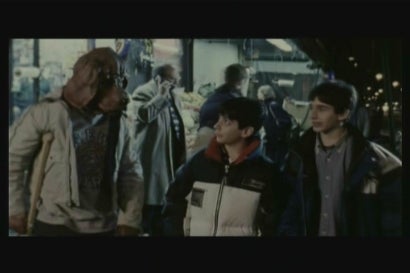 I want someone who can relate to me, which for better or worse means he needs an atrocious attitude, balls-to-the-wall honesty and blatant disregard for societal standards coupled with a demonstrated ability to use all the parts of speech and insanely hot spelling. But kindness and integrity count for a lot too.

Incendiary passion? Why yes please, and I'll take 2 of each -- intellectual, physical, and emotional, what with the recent deprivation and all. (Yes, I'm one of those "too much is never enough" people. Always with the portion control issues, whatever the experience or substance. Working on it, but what's my motivation again?)

Because honestly, a feckful wordsmith with enormous wit and compassion to match, not easily offended, but turned on by my incredibly full, round, hot, jiggly, touchable, melon-like brain would be manna from...the manna-producing region, wherever it's gotten to be these days.

I want to spend time with someone who isn't going to waste our time trying to make me feel like crap because I started smoking again last fall--that's my job, goddammit! DO YOUR OWN JOB AND I'LL DO MINE! But of course, your job will non-negotiably include killing the giant cockroaches whenever and wherever they appear. I do the spiders. This is a deal-breaker. Most division of labor issues I can flex on, as with so many things in human relationships, but not this one. Yes, I face the irrational fear and I hunt them down and kill them for myself. I'm a big girl. But if I can't get that from a man, he's no man I want to deal with. And do not ever, ever lie to me.

What more could I possibly want from you? Feed me jambalaya and panang and new words. Teach me things about literature and physics and sex that I didn't even know I was into, but wow am I! Educate me as to which constellations are which. Ask me to cook your favorite kind of pie and amaze me with your skill manipulating the numeric world around us by means of the creative usage of pi. Better yet, with phi. Play Pente with me while drinking beer in bed. Watch Animaniacs, Duckula, Pink Panther, Bullwinkle and Road Runner with me, then show me YOUR special skills and YOUR favorite cartoons. Swim with me. Walk with me. Sit with me. Wrap your arms around me and let me breathe. Get my references. Get the jokes. Get me. Get a grip. Get the check.

What about you? Taller than me? Good enough, and not that hard. Weird-looking? Whatever. Not so muscle-bound? Mental muscle is the most important here. College drop-out? If you can read, think and learn independently just because you like to that's even better than post-graduate education as far as I'm concerned. Old enough to have some idea what I'm saying here is critical. Younger than 50 is probably a good thing. Much MUCH younger than 50 is a lot better in my experience, but I may not have enough experience to know for sure. If you can make me laugh really hard and often there's not a lot else you need, and if in addition you can cook like a motherfucker I'll follow you to the ends of the earth.

I have relatively firm protocols in place. Not the usual ones perhaps, but that's hardly relevant. What matters is that I pretty much know what I want and mostly know with whom, and nearly a year after the end to my million-year but crappy marriage-like thing, I'm ravenous for it. My personal style, personal appetites, and recent experiences have all coalesced to let me know that I'm quite ready for something much more intense than brunch with friends, and I'm incredibly serious about brunch with friends. At this point I have talked for a very long time, until both you and I are tired of it, and I'd like to listen for a while. I can do that, too

This ad was placed into the public domain in 2009. Images by tbs. 2010 but mostly the writing of an anonymous person on craigslist. that I would seriously. seriously like to get to know.