August 04, 2009
I've been married for 15 years, this November. That is sometime, this November. Which is to say, I still have a vague feeling that I got married sometime in a date range around those first few weeks there in November.

And for the most part, its been a happy, productive marriage. She really is a driven, ambitious person. Two master's degrees. She gave me two kids. Boy and a girl. About the only thing that freaks people out is that she can be aggressive and call out things like racism. The lies of theological conservatism. The dirty truth below the surface. She has zero bullshit tolerance, in fact, even less. I was punished for three long years for an affair I never had. I think I might have been thinking about one. For her thats good enough.

With the children, she was always able to leave the tender moment alone. Our relationship disintegrated about four years ago, but she never lost her focus with the children. And so, when I went home I started casting about for family™ advice. To the last person, it was all about divorce.

Exactly as she predicted it would be.

One of my uncles said that my children shouldn't go to India, because "If you want those children to be American, they have to stay here." Another voice in my life said "If you send the children to India, we might move to stop you. They will be Citizens there." Another good one was .. "If she is going to stay in India, you might as well call (my brother the attorney) and file for divorce".

I am at a crossroads. Personally, my relationship between my wife and I has deteriorated to the point where I simply want to utter the four words and let the laws of man try to shut down the law of god again. I never dreamed I would make it to this point, but try missing someone for two weeks and then the first thing they do is launch into some kind of off the wall rant about racism? Does anyone hear exit music for a film ..?

At the same time, I trust her as the mother of my children. I always will. This infuriates those who advise divorce for me. I simply will not cast her as a demon. She is not the 'other', or the 'enemy'. Having a marriage in such an unstable state, where things finally show to be unstable - is like shaking the tree and watching all the rotten apples fall to the ground.

I guess its worth something. Maybe I've been screwing around with my life for the past few years. Funny how people can look at a happy, productive marriage and say its a bad thing - but they know the economic situation I've been going through - and they're familiar with some of the emotional ups and downs and accusations and drama and so on. I don't need a relationship recovery - I could have a relationship. But I probably need a personal recovery, I need to get a life. Seriously.

And I'm at the age where, I have this window I can find a mate and after which I'm just used up jet trash. I guess I still look good enough. Who knows.

I wish there was a way I could just inject either a latina or an indian into my arm. I hate getting sunburned. They want me to go out and get a nice white girl from a nice family. I suppose it could happen, but I have to make a decision pretty soon. The advice is all lined up fairly strongly on the side of terminating my marriage and moving on with my life. Why move on, if you don't have a girlfriend? I have no desire to be single, never did. Maybe thats why I never really was. Oh god. The wiccan high priestess... I just remembered her. That bitch was white in more ways than one. Snow is fucking cold. Poison ivy.. I think I just had a relationship flashback. Christ, dating can change you physically can't it. God I hate it. It's all such a meat market. Or in the case of ritual .. even worse.*

Anyway, family advice is dangerous - some of what they're doing works for them and yeah, you end up carrying the genetic traits you want. There's also alot of girls for some reason that are still single on my island. I think there are matchmaking wheels turning. But you know? There's usually a part that doesn't work and thats the part you're going to have to carry back to them at Thanksgiving and Christmas.

Then, there's the stuff we don't talk about. ;) That can be just as much fun. I'll get all of this worked out. After all, no booze, no drugs. Whats left but kinky sex and happy wives?

I did say wives. Plural. Do I have any chance at all?

* you don't want to know.
Update: Through space and time, a sphere returns with an answer to the question "will I have two wives ?" and the answer is clear: MY SOURCES SAY NO 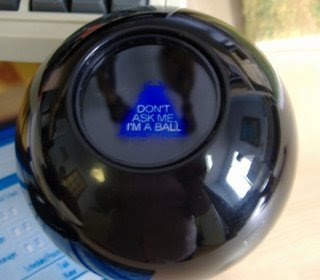