I slept with Tarot and Scarlet

July 16, 2009
I slept with Tarot and Scarlet last night. I woke up to find them nipping me. You have been warned. 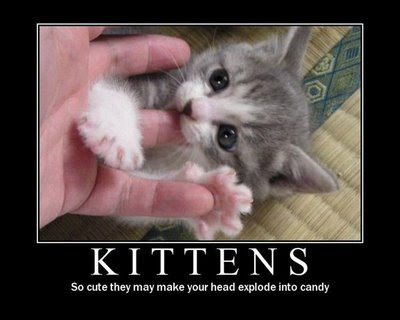 Colorless Green Ideas was originally designed to be an exploration of Thomas Mann's question regarding the acceptance of pretty bizarre things - like , the rise of the Third Reich and what the German University System did when the Aryan myth started going around. It was meant to ask questions. It began in 2004, and then I decided to shut it down. For two years. Then again in 2006, I ran until late 2007 and shut it down for months.

The basic idea behind the title of this blog, comes from a quote from Noam Chomsky - who , when asked at a conference - to produce a sentence that had no meaning whatsoever - said "Colorless green ideas sleep furiously."

If I am writing about kittens, it is probably time to hang it up. Those little nerds keep tearing into my quilt.

Last night I did Carmichaels Trainright Spin Class and I walked off before they hit the mountains (did about 30, 40 minutes of it) but my daughter was watching in rapt attention. This spin class starts taking it out of you right at about 5 minutes into it. Ever wondered how you could pray that 10 seconds wouldn't last so long? Try doing 3 minute simulated attack on the peloton at max heart rate and a cadence of 100 plus.

Its obvious I don't have enough to do.