The Role of Fantasy in Human Connection

July 09, 2009
Why do we fantasize about those we are interested in? What role does fantasy have, in human connection?

What separates love and hate? Why can people believe something that isn't true, when it comes to falling in love or hate. And. Uh... Here's a picture of Betty Page! :D 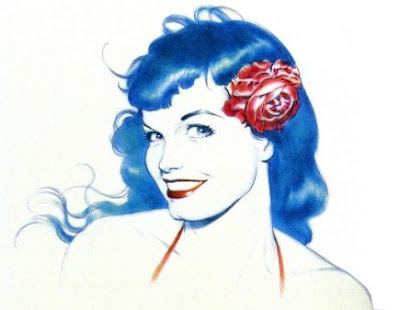 Fantasy is a structured progression - keying simple things to the person engaged. In my case, very subtle - almost nuanced facial expression draws me to Betty. She truly enjoyed what she did. A person who is trained to do what she did shows a certain sense of preparation. Betty was slightly spontaneous, a little edgy - and somehow completely adorable. Is it obvious I have a thing for her?

Fantasy is a part of the protocol of connection buildling. It is bidirectional. Just as we connect to human beings out of love and either rapidly or slowly unfold fantasy of the happily ever after, so to we find the slow burn of hatred and its eternal call. These are complex interactions that are part of fundamental life processes. There is no thin line between love and hate, instead , its a geometry.

Hatred is formed on the forge of intense feeling - whether justifiable, or not. In that moment where we give in to the feeling and release ourselves to dedicated purpose we hate the thing that is somehow stopping us. And in an inverse fashion we learn how to love that which helps us to grow. The connection between a man and a woman is a very special case of a generalized connectivity protocol we use to develop ourselves.

There are several instances in which environment can play a role. Either internal, or external. Crawling in my skin burns a hatred for the Third Reich. I see a swastika and I wish to lash out. At the same time, the images of the women painted on the nosecones of the B17s attack a part of my own self control in another way. This is an example of external environment.

Plateau effect in stroke recovery is a good example of internal environmental change. Note that we're still saying self is a constant - the biological network mesh in which a stroke survivor's thought plays out changes - but the self maintains a unity. As long as a stroke survivor can indicate in some way, that they feel as if they're basically the same person - they are.

Stroke survivors work their way through various levels, six months out they've usually made 70% of the recovery that they will make. Then perhaps 2 or 3 years later, they will come back to 80% - assuming the stroke injured them in a motor area. It should be said at this point that a stroke is very much like taking a bullet to the brain. It is a dangerous and often fatal incident, we are talking about an etiology of hate within the context of stroke recovery in motor control - moving your hand, or arm. Something where you can make rational judgements about who or what you can hate. And hate will come.

So. You will move your arm. And it will not respond. The automatic processes will go on. But your voluntary actions - supported by unseen and hidden involuntary responses - are cross-wired. A person could, for example, have their entire left side simply not move. You who were so certain of all the things the body can do. Are now suddenly forced to question even that.

As you make progress hope will dawn only to dark down as final plateau closes in. I would argue that final plateau states are separated by experientially exponential levels of difficulty. That can be tested. Nevertheless, the end user metric is best: the recovery is stalled and the person is moving in circles. In such a state, its easy to lash out at others. To debate whether the survivor is wrong or right is ephemera. I'm only asking the question how that lash will strike - what strengthens the hand , what guides the person to attack.

Seneca captured it best. He said that frustration arises from that which we feel entitled to which we are denied. You can be in a hotel room, ready to sleep - and there will be a jackhammer outside your window in the street. That sound will frustrate your efforts to sleep. You have paid for a room, the purpose is to rest there. And the sound from the street prevents it. You will be frustrated.

In such a state, being cross is a method of self defense from ones out inability to solve a problem. Have you ever noticed, that when people are angry - they will be sensitive to the least little thing? That irritability arises from a symmetry unfolding.

We are sent to a state where we can react in a focussed manner.

Looking at Love, simple questions are best. I was asked one today. My son said. Is there a button, we can push, to hate someone?

It stopped me cold. A wave of sadness came over me. I explained slowly to him that we don't really control whom we love, or hate - sometimes it just happens. There is no button we can push to hate.

But from that point on, motionless time unfolded for me. I slowly sat down and looked at the grain in my table. I reached over and set a fourth space at the table. I could not rationally explain why I had been confronted with these feelings. And I didn't have to. I was simply sad.

Fantasy helps build one-off connections that we use later to forge the bond or find within us the strength to jump beyond the plateau of human emotion in which we execute the required and the mundane. It is a simple leap for some, more difficult for others. For those who can love easily - they will fall out of love as easily.

But for those who cannot love all but only one they cannot deal with things simply. To hear someone say they don't love you - or that they do - is something that becomes painful in its intensity. And for some, it is a very rare occurrence. The fact that in some form it does occur in all is due to the fact that it is a part of the fabric of us all.

I AM he that aches with amorous love;
Does the earth gravitate? Does not all matter, aching, attract all matter?
So the Body of me, to all I meet, or know.
- Walt Whitman

It is not wrong to think the better of someone, or to see in all things the good and wish for them that part which is the better. There is an old story of two people who had been married for a very long time. Every night the woman would serve the man bread. And every night he would carefully cut away the crust. And place it carefully to the side. He would eat the bread and then give her the crust. Finally she confronts him, saying - Why are you giving me only that which is left over while you keep your favorite part? Surprised, he replied - "The crust is my favorite part."

Fantasy often ends up being treated as an idealization that can traverse these threads of life - it is transferrable. Fluid. One fantasy can be shared by others. And that fantasy in turn can influence the structure of other fantasies. For example, you could have a fantasy that you're listening to Limp Bizkit and jumping your motorcycle over a truck. And someone else could come along and say, wow. What if that fucker was on fire? And you could go. Like. Yeaaah. The next time you close your eyes and envision that 50 foot high tabletop with the throttle gunned and your Yamaha flying through space between your legs you've got a flaming truck way down there on the ground.

Being human , we can communicate these patterns to each other. There is such a thing as Mass-hate. Fueled by the myth of the Aryan nation, and the exactness of lies - Josef Goebbels successfully sold a 2 million man burn. The human body makes a very distinctive smell when it is burned. The power of that fantasy - that by cleansing the Jewish blood from their race - they would attain a godlike state - was extremely powerful. They literally had to ignore reality.

And they had to hate. They disconnected from Anne Frank - they did not see the little girl. They saw only a meatbag.

Lost in that delirium, they searched for meaning and found growth in their love of the Fuerher. Love and hate are not separated by a thin line - instead, it is a geometry. .