March 29, 2010
Trillions of dollars will be saved and costs will be slashed as a result of radical reforms - costs that were responsible for 1 out of every 6 dollars spent in America - being spent on healthcare. Think about that for a second. America buys tractors, jet airliners, cruise ships... just lift your thought up for a second and pretend you are looking at a satellite photo of the united states - and look around. Paint the state of California, Texas, Florida, Nevada, Ohio, Colorado and Georgia . Then step back. Thats how much of the entire cash of our country is poured into healthcare each year. Eight entire states out of fifty. Or rather. Was.

Because the GOP lost. And they lost big time. And so finally, we're going to see something nice for you, and me. And everyone else. And not just the lobbyist fat cats.

For awhile there, the GOP would try to tell you we are a republic. And it is not your job as a voter to make a stand on a particular issue and decide it - they would tell you with a straight face that your role as a voter is to put someone in power that can do the work for you while you go on about your business. Not so.

America is a democracy. And lobbyism - especially the form of Jack Abramoff - Bush Republican lobbyism that had completely disintegrated the notion that the Republican party is a party of conservatism - the kind of government spending that was unprecedented in scope and magnitude - has seen its day come. And go.

Below is a graph of the rising cost of healthcare in the United states. Note how, under the effect of an initiative by Richard Nixon - directed by lobbyists under the control of Kaiser/HMO - healthcare costs started to rise in the 70's. 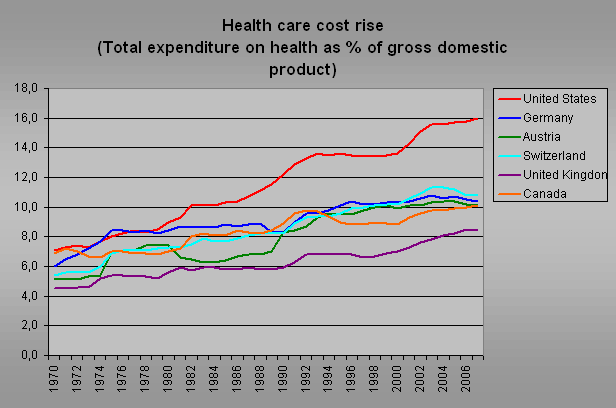 Austria is not a backward country. If you are ill there, you will be well cared for. It is safe to assume that there is a systematic problem in why the same care - or even, perhaps - worse - costs six times more.

But it doesn't matter. American democracy took a turn towards direct connection to the American people. Thanks to the internet, Americans see the process of electing an official as something along the lines of - find the candidate - do some internet research on them - use the net to participate in their campaign - and more importantly - keep using the internet after they're elected - to follow up and make sure they're doing what they are paid to do.

And so the GOP and their mechanism of getting paid off to do whatever the lobbyists want them to do - and their own inability to shake off the voices and leadership of failed hollywood entertainers - became the toxic issue that ended an American political party. And political Parties do end. Ever heard of the Whig party?

I thought not. After and leading up to the civil war - there was simple - a right side, and a wrong side - to be on, in regard to slavery. There was no gray area or band aid fix you could call up. You were for it or against it. The whigs were the precursor to the democratic party and they were on the wrong side of the issue. The republican party, started under Abraham Lincoln - was anti-slavery (for "the republic"). The whigs died off. The republicans, back then a noble institution - took a stand.

AnThe republicans had to stand up to the neos and theos or they would be on the wrong side of an issue - just like the whigs. The massive electoral losses in 2008 - threatened their lines of supply - the lobbyists that funded them wanted answers. And so the GOP decided it was better to try to stand up for the lobbyists - they took a chance, and tried to rely on the dog and pony show - and manufactured consent. Epic fail. Even today after they have been handed their hat in their hand, they still love to try to put up websites and pretend their donations come from the "grassroots". But once you give a dollar to a republican, it is never seen again. They go to Washington to sit around and try to shut the place down. Or they go to there to meet Bush Republicans like Jack Abramoff. This has been happening ever since Nixon. Want to guess, on this graph - where Nixon was in office? 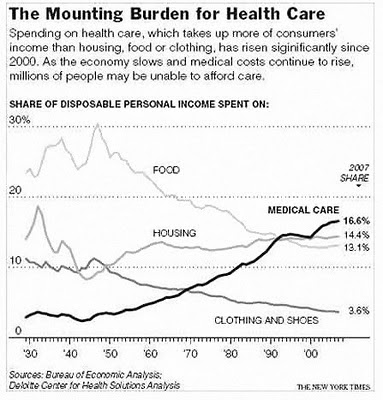 X marks the spot. This is where the Nixon adminstration took the first big chunk of lobbyist money from Kaiser to create the HMO. How many people do you know, personally - who have some kind of horror story to tell about HMO's?

The long and short of it is, that a woman speaker of the house - and a party in power that finally learned to listen directly to their own constituencies - ended up passing legislation that - will actually benefit you and me on a day to day basis. Think back - when was the last time a law was passed that actually helped you out - besides a tax break?

Think for a second about your Natural Gas bill before you blindly haul off and tell me a tax break is better for our economy than efficient, smart and low cost services. The regulated Natural Gas companies were 400 percent less costly to do business with. As soon as deregulation hit the industry - your Natural Gas bill shot up 4x what it once was. And you got a tax break to keep you quiet - while the corporations lined their pockets with the 300 percent higher revenue that they were getting out of you.

They do this because there is no real market. Just like healthcare. There are only large corporations moving back and forth, fixing prices. They signal to one another where they are going to go with their price per therm. And then before you know it you're paying a fortune. And the CEO's of both companies walk off with miniature petting zoos, learjets and their own private yacht.

It is the year 2010. If in this election year, a key and central issue of the campaign of those who are heading to congress would be to fight for a National Health service, then the last nail in the coffin of the lobbyists would be driven. They are praying that you and I think the Healthcare issue is resolved. It is not. The legislation before us was passed with lobbyist money distorting the US Senate versions of the bill. We will have to carry healthcare insurance. And there will be no National Health Service.

But to create one. In this election year. And to quickly follow up the changes with one simple change. Alan Grayson's bill, that simply removes the age limit requirement on medicare, and allows people to buy into Medicare - will be the end of the story for the GOP. And out of the ashes of that party may arise a party that actually stands for conservatism.

Which wouldn't be all that bad, really.