Too Much on the Pacific Plate?

March 15, 2010
The Chilean Earthquake was remarkable in alot of ways - first, in that it was giant. Weighing in at 8.8, it was the biggest earthquake in a long time. But second, the aftershocks have been pretty big as well. When you have a 7 coming in for an aftershock, you feel it. Not many people know it, but Japan just got a 7.2 last week. Thats three really big earthquakes in less than two months.

All of this left me wondering when the big one will hit California. The San Andreas , the faultline that causes almost all of the activity in California - sits between the North American and Pacific Plate. It has produced the Oakland Bay and many of the distinctive features of California - heading sideways, it pops and slips along a line extending roughly parallel to the Pacific Coast Highway. It is a very active fault, but it has not corrected itself for a long time. The last heavy magnitude earthquake in California was in 1906. San Francisco was completely destroyed by the 1906 quake. Much of the lower presidio and the areas built on soft sand below were blasted almost to the ground.

The San Andreas primarily slips north to south. If you can imagine holding your hands tightly together and then pushing up against one of them and eventually the hand slipping free - you will get a feel for how the plate is riding against its resistance line. Some have suggested the plate might be rotating clockwise. How these last two big earthquakes hit this past month (not to include the big undersea earthquake just a year or so ago in the Indonesian ocean) give us a good idea of where the plate is turning. Here's a map of the latest activity in the last two months alone. 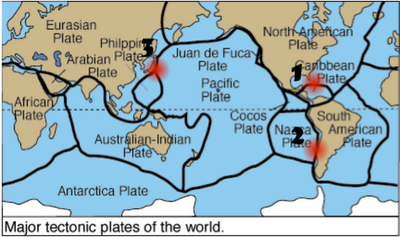 I am not sure which way the plates actually moved although I can visualize the Chilean earthquake actually changing the rotational speed of the planet (its kind of like a dancer extending her arms in a pirouette and bringing them back in - she gets faster as she pulls them in). What do you read from all of this? Do you think California will get the big one? Does anyone know which way everything is moving here on this map? Mail me and I will update the map. Thanks!